PLAYING WITH NO PAIN AND TO THE HIGHEST LEVEL: THE CASE OF MUSICIANS 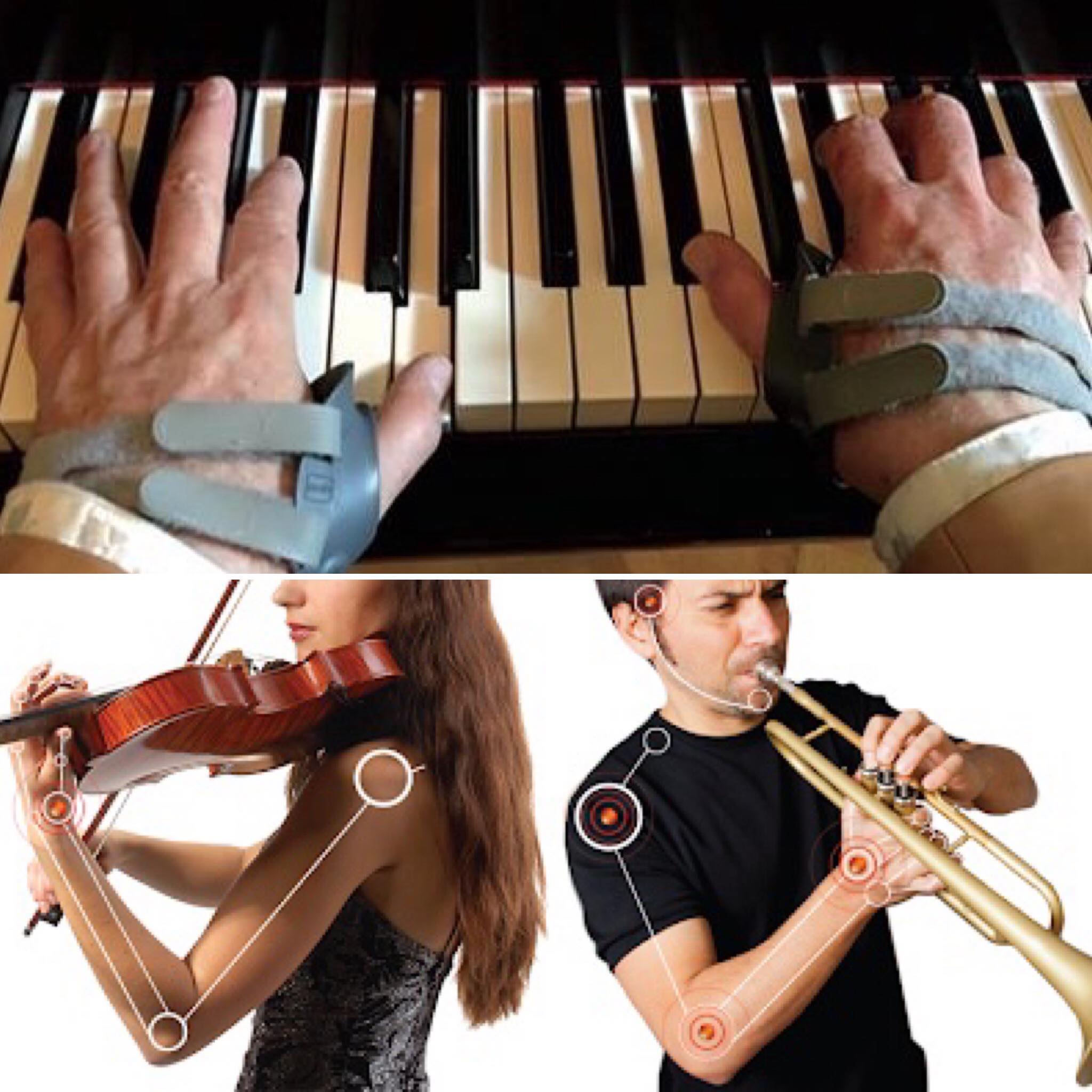 I affirm this with the conviction of someone who knows these two universes well: musicians are high-performance athletes, but they do not treat themselves as such. Professional musical performance and high-performance sports require very similar levels of commitment, as well as physical and mental demands. The time, commitment and consistency required to achieve a high level of performance playing an instrument or performing a specific sport skill have much more in common than one might initially think. Some differences will lie in the fact that, in general, neuromuscular recruitment associated with playing an instrument has a greater focus on fine motor skills (i.e. short movements of greater precision and performed mainly with the limbs extremities) and less at the level of gross motor skills (i.e. larger movements involving larger muscle groups) that we normally associate with sports movements. However, it should be clarified that both large muscle groups play an important role, particularly at a postural level, in instrumental performance, and the smaller muscles associated with fine motor skills also play a fundamental role in most sports movements.

For example, if we establish a parallel between playing the violin and performing a given sport specific skill in tennis, we find that, although at different levels, a balance of fine and gross motor control is necessary for better performance in both activities. When we play the violin, we want to maintain a high and controlled posture so that holding the violin with the non-dominant arm and handling the bow with the dominant arm allows the fine work of the hands and fingers to occur as efficiently as possible. Now, if the musculature involved in the stabilization of the trunk and in the elevation of the arms is weak, fatigue sets in more quickly resulting in postural loss, in an execution carried out with greater muscle tension and consequently in a worse performance. In the case of the serve in tennis, due to the high demand for motor coordination and strength involving all the large muscle groups of the lower and upper body, there is also a need for high levels of fine motor skills coordination regarding wrist, hand and finger movements, in order to implement a given spin effect and the desired direction to the ball.

In fact, both musical and sports performance involve neuromuscular recruitment to produce movement and work that requires precision, speed, endurance and strength. In addition, and particularly at a professional level, playing an instrument and playing a sport are activities that require long hours of repetitive movements that, combined with poor physical conditioning, can lead to a variety of clinical conditions. It is unthinkable that a highly competitive athlete does not follow a training program targeting the development of his/her physical qualities which should be complementary to the practice of his/her sport. It is easy to recognize that a good physical fitness level will ensure greater resilience and longevity in sports. The same applies to musical performance. Musicians are high-performance athletes and should prepare themselves as such! Living and playing with pain is not inevitable, it is an option.

The prevalence of pain and injury in musicians

As the years go by and the hours playing their instrument accumulate, it is almost inevitable that professional musicians develop musculoskeletal and/or neuromuscular problems of varying severity at some point in their career. More so if they do nothing about their physical preparation. Review studies on the prevalence of injuries in professional musicians point out that 76% of musicians suffer or have suffered from physical problems that prevent them from performing at their usual level and 84% had injuries that interfered negatively with their musical practice1. Some musicians will develop tendinopathies and low back pain of varying intensity, which they will be able to manage with chronic intake of anti-inflammatory medications or simply by playing less frequently and/or just by enduring pain and discomfort. Others will develop more serious overuse injury syndromes that will become chronic and compromise not only quality of musical performance, but also quality of life, forcing them to periods of musical inactivity. Additionally, others will suffer from even more serious forms of injury that may result in abandoning their career as an instrumentalist musician.

In general, the most frequent injuries affecting musicians manifest themselves through pain and/or dysfunction, especially on the joints, tendons, ligaments and nerves of the upper limb, head, neck and spine. For example, in orchestral instrumentalists, injuries of musculoskeletal and/or neuromuscular origin are more common and affect about 64% musicians, of which 20% consist of peripheral nervous problems and about 8% of cases of focal dystonia2. It makes sense, considering that these are the most stressed areas of the body during instrumental practice. An exception would be the cases of focal dystonia, which, although it may be accompanied by pain and musculoskeletal injury, the root cause of the dysfunction observed at the peripheral level is actually central, that is, the dysfunctional neuronal circuits are at the upper levels of the central nervous system such as the cerebral cortex. Thus, the most frequent injuries in instrumentalist musicians can be summarized as follows3:

Preventing and resolving injuries in musicians

Any elite athlete empirically knows something that has long been supported by science. That the most effective way to prevent (and also treat) overuse or overload injuries due to high volume sports practice is to ensure good levels of physical fitness combined with good recovery habits, adequate rest and nutrition. Regarding physical fitness, it is unthinkable for an elite athlete, not to follow a regular physical training program. An athlete knows that this will have negative consequences both on sports performance and on the susceptibility for developing injuries. The athlete knows that the weaker his/her musculoskeletal system is, the greater the vulnerability to injury. The question is, and if we consider that professional musicians are required to engage on activities requiring high physical and mental performance for long hours of daily practice, shouldn’t musicians treat themselves as high-performance athletes? I am certain that they should.

In fact, a 2019 systematic review investigating the topic of physical training for professional orchestra musicians1 indicates that following a structured physical training program of varying durations (from a few weeks to several months) has generally resulted in significant improvements in musical performance and in reducing (and even eliminating) chronic pain1.

To keep playing at the highest level for a long time, musicians would greatly benefit if they treated themselves as high-performance athletes and ensure that they maintain good physical shape combined with good habits of recovery, rest and nutrition. And to be clear, when I talk about staying in good physical shape, I don’t mean playing sports. In fact, playing sports as a mean to improve one’s physical fitness is not ideal and can even be harmful. More activity with asymmetric characteristics would be added on top of another, also asymmetric, which is playing a musical instrument. In general, all sports are constituted by specialized movements, and for that reason, also asymmetrical. So, except for purely recreational reasons (which can also be positive at a mental and stress release level), the practice of a sport as a strategy to improve physical fitness is not ideal and should not be the first choice particularly by musicians (I discuss this very topic in this article: Why musicians should not play sports).

General physical fitness is improved through the process of training our physical qualities. This should entail an assessment of the initial status in order to identify specific limitations and outline a specific intervention strategy. One should always start at the base and progress from there, just like the process of learning to play a musical instrument. Here, attention to detail is key. A well-designed training program implies the management of training variables specific to the profile and objectives of the athlete or, in this case, the musician. A correct selection of exercises is crucial, as well as close monitoring of their implementation regarding form of execution, training load and progression over time. As I mentioned, it is not very different from the process of learning to play a musical instrument!

For a musician, playing the instrument is the top priority. It can be obsessive, I know. But playing better in the long run does not necessarily mean playing more hours, but rather investing in taking care of the ‘’machine’’ that is our body. I reiterate once more that playing with pain or discomfort is an option and not an inevitability. Take care of your body and treat it well, because you will need it in the long run!