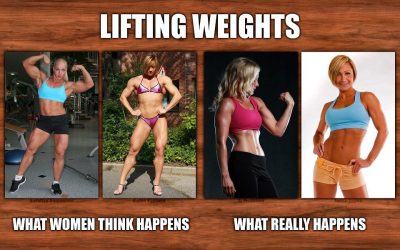 Most women are afraid to lift weights like men because they think they will look bulky and like the women we see on the left hand pictures. It is time to demystify this idea and explain why this is impossible (provided than no hormones and/or anabolic steroids are used), and why strength training is key and a great ally to improve a number of parameters, including body composition.

Overuse of low-intensity training protocols by women is too common. Too much emphasis is placed on cardio, machine use, treadmills, bicycles, light loads, and too little emphasis is put on what will promote better physiological adaptations for increasing women’s functional capacity – strength training. If you want to bring more years into your life, you should start looking at strength training as one of the most effective anti-aging tools on Earth. There is no system in our body that is not influenced by strength training! Have I told you that it is cheaper than the creams you rub on your body every day?

I will divide this article into three parts. First, let’s highlight the myths of strength training for women, which were already addressed by Ebben & Jensen in 1998 in Strengthening for women: debunking myths that block opportunity. Second, let’s highlight its main benefits, and third, let’s explain why you will not look like Arnold Schwarzenegger.

1. MYTHS OF STRENGTH TRAINING FOR WOMEN

In addition to improving body composition (loss of fat mass and increase in lean body mass), strength training will help you:

In summary, strength training has the potential to restore the shape of your glutes, the glow of your skin and the tonus of those parts of the body that you think is only possible through surgery, miracle supplements and advanced techniques of “muscle toning”. Strength training can also help you live the life of your dreams.

3. WHY I WILL NOT BECOME ARNOLD SCHWARZENEGGER? 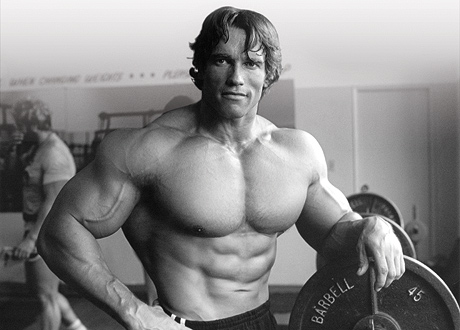 Women have different physiological characteristics from men and this is the reason why women have greater difficulty in gaining muscle than men. As I said at the beginning of this article, if there are no hormones and/or anabolic steroids involved, it is very unlikely that women will look like men.

In conclusion, before beginning a strength training program, be aware that you must have movement competency in the first place. Just as you would not begin to calculate derivatives in mathematics before you know how to add and subtract, it also makes no sense to start lifting heavy loads if you have restrictions and/or asymmetries in your movement profile. The quality of movement is the foundational support for functional strength development so this “ingredient” will always have to come first.

For a graphic resource check out this nice infographic from Positive Health Wellness.

See you soon and enjoy 🙂

Several lines of evidence suggests that mitochondrial dysfunction is associated with sarcopenia (loss of strength and muscle mass in aging). In every cell of our body there are hundreds or thousands of mitochondria, they exist in greater quantity in the most active organs and tissues (muscles, heart and brain). The reason we age faster derives from the constant injuries and insults inflicted to the mitochondria. Chronic stress, lack of sleep, poor eating choices, lack of exercise (particularly strength training), alcohol, tobacco, and exposure to pollutants are just a few examples of how our lifestyle can influence the function of these small structures.

Mitochondria are the organelles responsible for energy production in our body. If you feel always tired, if you experience memory loss, if you have frequent muscle pain and if you are one of those people taking medications for cholesterol, hypertension, diabetes and other chronic diseases, it is very likely that your mitochondria are not in “great shape”. But let’s look at some evidence.

This study may be considered revolutionary because of its highly relevant findings regarding the benefits of strength training in older people. This study was published in 2007 and was the first study human study to demonstrate that strength training can reverse the aging process at molecular level. If it was a drug or a food supplement demonstrating these effects, I think everyone already knew.

The authors selected relatively active older adults and sedentary young adults in order to study the aging process on healthy elderly and not just the putative aging effect of physical inactivity. All older subjects underwent a thorough screening process before being admitted to the study to ensure that other factors (e.g. metabolic diseases) would alter mitochondrial function.

All subjects completed a medical evaluation before participating in the study. Exclusion criteria were: evidence of heart disease (by history and sub-maximal graded exercise test); hypertension; chronic obstructive pulmonary disease; diabetes mellitus; renal insufficiency; orthopedic injury and smoking. None of the subjects had previously participated in a structured resistance training program.

Subjects initially started with a set of 50% of 1 maximal repetition (1RM), and gradually increased to three sets at 80% of their 1RM during the intervention period. Subjects tested their 1RM for every exercise every two weeks, and training loads were adjusted to maintain 80% of their 1RM.

All younger subjects (N = 26) underwent a muscle biopsy (incision and extraction of a small part of muscle) from the vastus lateralis (thigh muscle) before and after the 26-week study. The elderly subjects (= 25) did their biopsies before the study and after (N = 14) of the study. Muscle RNA (ribonucleic acid) was analyzed to determine age-related gene expression variation.

The authors identified 596 genes that were differentially expressed between the two age groups. Of the 596 genes, the researchers identified 179 associated with age and exercise that showed a remarkable reversal in their expression profile after six months of resistance training. This literally means that resistance training not only can slow down but also reverse the aging process at the genetic level. The genetic expression of the elderly individuals became similar to those of the younger group. The researchers also noted that mitochondrial dysfunction (closely related to physical inactivity) began to reverse after six months of training.

As for muscular strength, results were as expected, that is, the ones who strength trained got stronger. The initial gap of 59% in maximal isometric strength in older people vs. young adults was reduced to 38% after six months of resistance training.

Nowadays, it is widely accepted that physical exercise is associated with a decrease in morbidity and mortality in humans. This is not a belief. What people probably do not know is that there are forms of physical exercise that are more effective in increasing strength and longevity. This study demonstrated for the first time that resistance training can reverse age-related aspects at the gene level. Yes, you are reading well, resistance training can reverse aging at the molecular level!

The fact that older people got stronger was no surprise to me and certainly not for fitness professionals. It is not uncommon for older people to begin their training with minimum weights and, in a short time, evolve to loads equal to or greater than those in their twenties. It’s all about dedication, consistency and method.

Over the years, personal trainers and fitness professionals have been preaching their clients / athletes about the importance of physical exercise in improving health. This message, in my opinion, has not been well perceived by most people. Understanding the notion that movement and physical exercise is as important as the food they eat every day is, unfortunately, still lacking.

In short, this fascinating study is basically telling us that it is within our power to increase health and longevity. In this case, the “fountain of youth” is something we know and something that is relatively accessible to everyone – Strength Training.

However, for these benefits to occur, people have to be willing to work hard and with consistent effort, something rare in our “all in moderation” oriented society. Most people are in search of a miraculous pill and rather rely on faith than doing something for themselves. Therefore, I believe that only focused individuals and those who follow these principles in training (and in life) will end up having the most benefits. Things will not happen by chance, certainly.